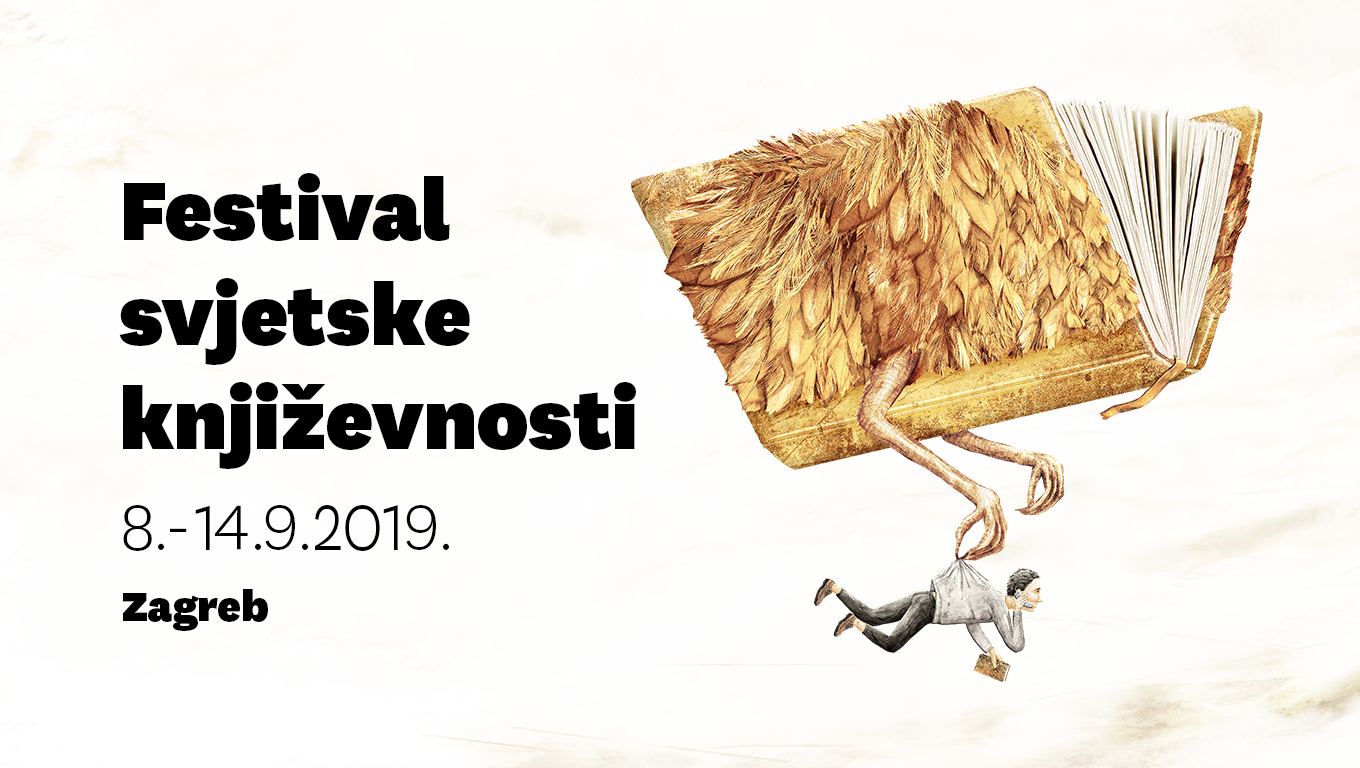 The Seventh Festival of World Literature

This year’s Festival of World Literature, the seventh in a row, brings to Croatia, as always, a number of celebrated figures from European and world literature, who then connect with domestic writers: together, in the Festival’s many programmes and events, they prove just how alive, and important, the literary word is.

This year, the most significant novelty is that the Zagreb events will mostly be held in the Croatian Music Institute. We hope that this is the beginning of a long-term collaboration, through which many celebrated names from the international and domestic literary scenes may also be heard in the longest-lived institution of Croatian culture.

The 2019 Festival of World Literature has as its special focus literature in the Spanish language: and so a significant number of relevant writers will be attending. The Festival will open on Sunday, 8 September with one of the most significant contemporary Spanish authors, Fernando Aramburu, in discussion on his novel Patria – a novel about the Basque Country that has won a number of Spanish and European literary awards, has been translated or is being translated into more than 30 world languages, and in Spain itself has sold more than one million copies.

From the Spanish-speaking lands, in addition to Fernando Aramburu, we will host the Argentines Jorge Bucay, world renowned writer and gestalt psychotherapist, and a favourite of Croatian readers, and Samanta Schweblin, a rising young star of the global literary scene; from Colombia, Laura Restrepo, well known by Croatian readers; and the celebrated emerging Madrid poet Elena Medel. We are also delighted to host, in collaboration with the Croatian PEN Centre, the Director of the International PEN Centre, the Catalan poet and activist Carles Torner, and the poet George Mario Angel Quintero. For the realization of the Spanish segment of this year’s Festival, thanks are due to the Spanish Embassy in Zagreb, and to Accíon Cultural Española (AC/E), which has given invaluable support for the inclusion of Fernando Aramburu and Elena Medel through the Programme for the Internationalization of Spanish Culture (PICE), through which Mobility Grants have been awarded for the inclusion of these authors.

Again in collaboration with the Croatian PEN Centre, we will mark 20 years of Lyrikline, one of the most important platforms for the promotion of poetry; Thomas Wohlfahrt, Christiane Lange, Jan Wagner, Zvonko Maković and Tomica Bajsić will speak on this. Further, two poetry evenings will be held in the beautiful space of the Meštrović Atelier on Mletačka Street.

The Festival of World Literature, in partnership with Vilenica (the longest-running Slovenian literary festival) and Cúirt International Festival of Literature (based in Galway, European Capital of Culture 2020), has this year again successfully applied for funding through Creative Europe from the Education, Audiovisual and Cultural Exchange Agency (EACEA) for the two-year collaborative project entitled Read Me I am Yours: one segment of the Festival programme will be dedicated to this project. Thus the Ukrainian writer Myroslav Laiuk and the Spanish writer Elena Medel will be on Read Me I Am Yours’Residency for young writers, at Zagreb’s Museum of Contemporary Art.

The Festival, of course, contains not only Spanish-language authors, but a total of more than 100 international and domestic writers, literary critics, scientists, visual artists and musicians. At the beginning of this September, these will together place Zagreb on the map of the most interesting literary centres in Europe. These authors come from 18 countries over three continents.

Like with every previous year, there will be Literary Matinées for pupils from Zagreb’s high schools, in which Julijana Adamović, Jurica Pavičić and Nebojša Lujanović will participate. We have also widened this programme to include matinées involving a foreign language, so that this year at Gymnasium XVII we will have as our guest the French author Maylis de Kerangal. For the pupils from High schools, we have also organized journalistic workshops in collaboration with 24sata and the weekly Express, our media patrons.

Besides our traditional conversational segments, Tribina Razotkrivanje (Disclosure,one-on-one conversation) and Dvostruki portreti (Double Portraits, one interviewer, two interviewees), and the programme Pisac i njegov čitatelj (The Writer and the Reader), we have a series of expert lectures and discussions. The latter will include a lecture on the Polish literary giant Stanisław Ignacy Witkiewicz, on the eightieth anniversary of his death; another on the role of Robert Musil in European literature in light of the Croatian publication of his third book Der Mann ohne Eigenschaften (The Man Without Qualities), translated by Andy Jelčić; and a lecture from Alessandro Vezzosi, a leading expert on Leonardo da Vinci, marking of 500 years since his death.

There will also be round tables.World Without Walls marks the thirtieth anniversary of the fall of the Berlin Wall, but reflects simultaneously on the more recent announcement of Trump’s border wall with Mexico: it is organized in collaboration with the Croatian PEN Centre. A further round table will be on The Role of the Cathedral Today and Tomorrow, conceived in light of the fire at the Notre-Dame Cathedral in Paris and jointly organized with the Institut français in Zagreb. There will also be a discussion with the German philosopher and writer Wolfram Eilenberger, author of one of the most widely sold and widely translated book on philosophy, Zeit der Zauberer (Time of the Magicians), which discusses the most important decade of twentieth century philosophy and four of the greatest philosophers of the first half of the twentieth century: Ludwig Wittgenstein, Walter Benjamin, Ernst Cassirer and Martin Heidegger.

All these programmes and events will be chaired by prominent Croatian writers, critics, editors, writers and journalists: all events will be simultaneously translated. Entry for the majority of events will be free of charge, though the evening programmes in the great hall of the Croatian Music Institute will be ticketed: however, every ticket will also function as a discount voucher at the Festival Book Shop. Tickets can be bought online through the Entrio system, or at the Festival desk from two hours before the beginning of the programme.

Like with previous years, we have also organized a series of exhibitions. In the Studio of the Josip Račić Modern Gallery Studio twenty eminent and upcoming Croatian visual artists will exhibit their own paintings, drawings and collages inspired by works of literati, under the curatorship of Tomislav Buntak. At Galerija Šira, another exhibition will be held, of submissions for posters for the Festival of World Literature, made by students at the Academy of Visual Arts in Zagreb over the past three years as part of a competition jointly run by the Festival and the Academy. The visual for this year’s Festival was created by Ivan Stanišić, a fourth-year student at the Graphics Department. In the gallery of the Cultural Information Centre (Kulturno informativni centar, KIC), one of the most celebrated contemporary Austrian photographers, Kurt Kaindl, will present an exhibition of his own photography from his travels in European minority communities, journeys made over more than a decade with the equally celebrated and award-winning Salzburg writer Karl-Markus Gauß; this exhibition is supported by Austrian Cultural Forum Zagreb. The exhibition of portraits of this year’s Festival participants will be organized in the Croatian Music Institute.

A special treat is the theatrical re-enactment of a celebrated lecture by Miroslav Krleža, in the building of the Croatian Music Institute. In 1930 Miroslav Krleža, in the same Croatian Music Institute, gave a lecture to a full auditorium: Jutarnji list daily reported that more than 800 people attended. Krleža was due to hold a second lecture on Croatian literature, on 12 April 1933, but the police banned the event. This, the “third” Krleža lecture on Croatian literature, has been assembled from everything we have inherited from Krleža, by the Krleža expert Vlaho Bogišić. Miroslav Krleža himself will be played by Ozren Grabarić, one of our most renowned actors, a star of the Gavella Theatre and a professor at the Academy of Dramatic Art, University of Zagreb; the director is Aida Bukvić, a renowned director and professor. With this unusual event we seek to remind of the links between the Croatian Music Institute and the literary world, which we sincerely hope will be revived into continuity in this seventh edition of the Festival of World Literature.

This Festival would not be possible without the generous support and collaboration of our patrons, sponsors, partners and certain media outlets.

The Ministry of Culture of the Republic of Croatia, the City Office for Culture of the City of Zagreb, The Creative Europe Programme of the European Commission, the City Assembly of the City of Zagreb, Hrvatska Elektroprivreda, Acciona Energy, Altus Information Technology, Hrvatska Pošta, the Miroslav Krleža Lexicographical Society, Austrian Cultural Forum Zagreb, Goethe-Institut Croatia, Institut français de Croatie, AC/E, Traduki, the Embassy of the Kingdom of Spain, the Italian Institute for Culture in Zagreb, the Embassy of the Republic of Poland in Zagreb, Culture Ireland, and Institut Perevoda.

By using these websites, you agree to the use of cookies. Find out more